Taryn is a senior art student at University of Cincinnati, and had research funding for her residency in August. At Constellation Studios she created 8 etchings, made handmade paper for the title page, with a letterpress printed text, and put all together in a hand-bound book, all in 2 1/2 weeks of intense concentration. Great project! Here are a few highlights.

This beautiful and extensive show holds many works, and these images share some of the details, texts, and structural inventions of Bonnie’s prints, books and objects.

An exhibition on the life and works of veteran artist and teacher Bonnie O’Connell, professor emeritus of University of Nebraska Omaha School of the Arts will be presented at Constellation Studios, Lincoln, Nebraska.   Curated by Karen Kunc, the retrospective will take viewers through her artistic journey spanning over forty years.

O’Connell produces work in the media of book arts, letterpress and relief printmaking, collage and assemblage, that address the material culture of prints and books, often deconstructing and celebrating printed ephemera, the book as object, and the charged images of the past and present.

She taught courses in book arts (letterpress printing, typography, book design, bookbinding, and papermaking), alternative media and color theory. She has directed and produced fine press limited editions of contemporary poetry for Abattoir Editions, the literary imprint of the Fine Arts Press at UNO. She also maintains The Penumbra Press, her own private press established in Lisbon, Iowa, with a 40-year history in literary fine printing.

O’Connell is a celebrated book artist, known for her teaching, wit, and vast knowledge of the fine press book field.  Her mentors include: Walter Hamady who introduced her to letterpress through his Perishable Press Ltd. and his legendary teaching at the University of Wisconsin Madison; Kim Merker who founded the Windhover Press at the University of Iowa; and printer-publisher Harry Duncan of the Cummington Press and Abattoir Editions at UNO.     She has collaborated with noted writers, poets and artists, including Poet Laureates Rita Dove and Ted Kooser, Norman Dubie, Tess Galleger, Lynn Emanuel, Brenda Hillman, and David St. John, Louise LaFond and Karen Kunc.

These invited artists are attracted to the woodcut process for the extensive carving effort and handwork that goes into the wood itself, that affects the quality of detail in their printed impressions.   These artists share skills that are expressive or methodical, intimate, illusionary, layered, for the characteristic graphic impact that we love in the woodcut print.

This annual workshop drew 12 artists from across the USA…coming from San Francisco, Virginia, New York, Illinois, Idaho, South Dakota, Massachusetts, and Nebraska. Intense work and comradarie of the group enabled sharing and a fun spirit, as we got to know each other across the ink and while carving blocks. Beautiful prints were accomplished by all, as we enjoyed the studio set up, and the nice spring atmosphere. Thanks all for a great workshop!

Artist Robyn Langley, from Boca Raton, Florida, was in residence in May – June, creating her etchings on copper and printing series of editions and unique impressions with collage and letterpress. Her images of high fashion dresses are disembodied and iconic, and play with the patterns and details that abstract the human form. In her collage prints she studies pattern and design, and relishes visual contrasts and cross-cultural references. Her soft-ground etchings captured layers of details from pressed feathers and leaves, printed with a letterpress printed poem. She is going on to graduate school in the fall…..good luck Robyn! 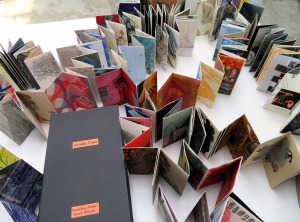 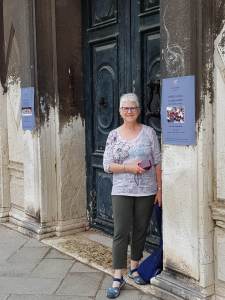 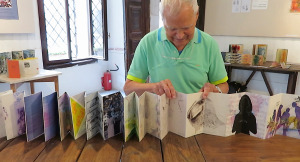 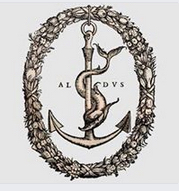 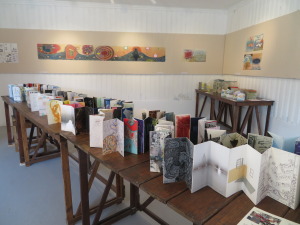 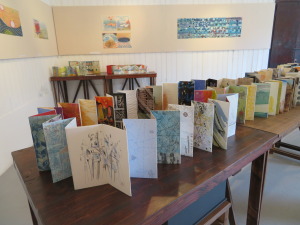 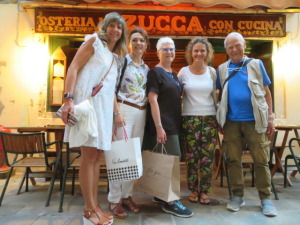 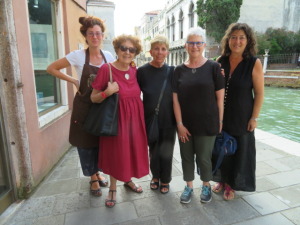 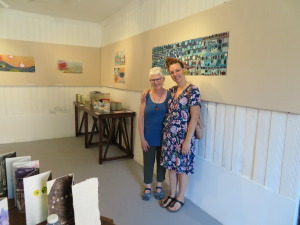 Jenene Nagy spent an intense week of carving thin lines onto woodblocks and printing onto silk fabric  with silver and graphite oil base inks to create a collection of “flags”.    Her work plays with the formation of signs from the negative and positive shapes and repetitions, as the flags are grouped to create optical new interior spaces and contrasting “afterimages”.   She is interested in how “the flat graphic print becomes activated in space through the physicality of its material”.   We experienced this visual versatility through the floating of the silks……beautifully flowing as we carefully handled and printed the sensuous fabrics and while looking through and within each.   Jenene will use these printed flags for an upcoming installation/sculptural project to be presented in New York this spring.   We are so proud to have been instrumental in this important production!

Jenene Nagy is a teacher and curator who lives in the Los Angeles area.

Artist in Residence Aya Nakamura has been in the studio throughout November, working on a  huge painting/drawing on canvas, and enjoyed have the wall and space!   Aya is from Tokyo, Japan, and enjoyed the quiet pace and light in Nebraska.   She also worked on woodcuts combined with painting, and dived into learning about oil-base ink for woodcut methods (the image below is of her woodcut in the drying rack, so an unusual perspective here).  Her works in animation are featured in the programing on Thursdays and Fridays at the CUBE Art Project of Lincoln, in the Haymarket Railyard.  This is our giant outdoor digital projection site, and the art series are by artists from all over the world.   https://www.cubelincoln.com/

So great to have Aya here, and thank you for joining the Constellation Studios community.

Thank you everyone for joining in with such good spirit of work, sharing, intensity and experimentation.   It was fun and challenging to steer the energy and questions…..a great learning experience for all!  Here are some of the works and students!

Waves of Riches is a beautiful installation that includes prints, and books, and the installation of a large, layered paper multi-print work.   Here are some photos to capture the sense of the installation, thanks to photographer Ann Sherman.   On view May 18 – July 15, 2017. 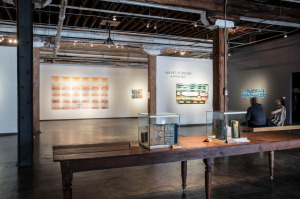 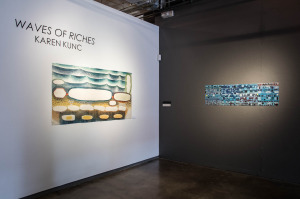 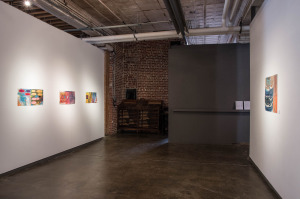 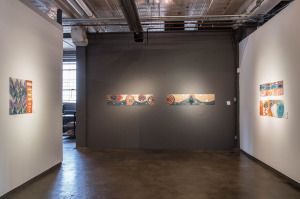 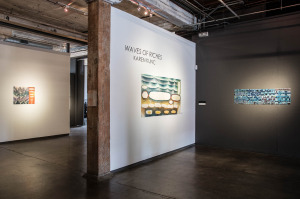 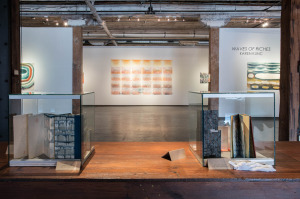 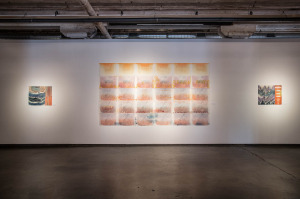 Shiho, from Tokyo, Japan, spent the month of November at Constellation Studios, and worked well in the rhythm of life in Lincoln, and with her own creative discipline.    She planned and accomplished a large multi-sheet monoprint that addresses the subtleties of luxury fabrics and the fashion world.   She also experimented with drypoint prints made from thousands of minute scratches on plastic plates, that she printed with water-base inks.   This technique, new for her, enabled her to make a small series of journal-like images from her experiences in Nebraska, and then a complex 4 part detailed image of a model on the runway and the audience.   Shiho demonstrated incredible persistence and patience to realize her print projects!   All so impressive for our First Friday visitors.   Thanks for your residency Shiho!