Here are some nice details from the exhibition Unfolding the Map.   What a beautiful show, and so honored to have these works at the studio!

Sarah Turner, an artist from Detroit, was in residence at Constellation Studios for two weeks in April.  She worked on a series of prints made from inked objects and found materials, transferring detailed impressions, that literally spoke about form and function, of everyday detritus, and elegant simplicity.    She delighted in her discoveries from the hardware and thrift stores, and how to find the right pressure to capture the hidden textures.

Works in print and wood by Kathy Puzey & Sara Tabbert

These artists use wood for carving sculptural objects and as a matrix block to print from onto paper.   Their work in art-making is, in essence, to deconstruct this “once living” material, and then reconstruct the life force of the universal tree via their images and embedded meanings.   Carved panels, prints, and installation lead us through their creative actions onto raw material – actions that can be seen as violent, necessary, ritualized, and even reverent.

Kathy Puzey grew up in Utah, as is currently an Associate Professor of Art at Utah State University. She earned her MFA from UNL in 2001, then held positions at the KNH Center in Nebraska City, the Anderson Ranch Art Center, and has been an artist in residence at Fiskers Art Colony, Finland.   She has received recognition with an Artist Fellowship from the Utah Arts Council in 2011, and a USU College Arts Teacher of the Year. She has exhibited widely nationally and internationally. 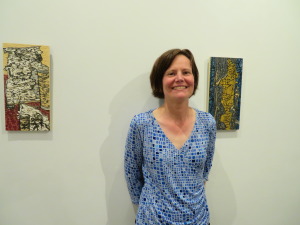 Sara Tabbert was raised in Alaska, went to Grinnell College in Iowa, and received her MFA from UNL in 1997.   She now works as an independent artist in Fairbanks. On the way she held interesting positions as a children’s camp leader, bike tour guide, cook & baker at park lodges, while conducting engagements as an Artist in the Schools. She has been an artist in residence at: Zygote Press, Cleveland; Montana Artists Refuge, Basin; Proyecto ACE, Buenos Aires, Argentina; Artist in the Parks programs in Denali National Park , Zion National Park, Isle Royale National Park.   She has won numerous public art commissions throughout Alaska, and Alaska State Council on the Arts Career Opportunity Grants.   She presented a solo show at the Anchorage Museum of History and Art, and has exhibited in numerous venues.