A virtual walk through of the gallery!   Metropolis includes 303 international artists and originated in Europe and was assembled in Venice Italy in 2014.   Invisible Cities will be bound in 2016, and all the 228  folio pages are shown on the walls.   This new accordion folded book has contributions from across the USA, and from Chile, Italy, Poland, France, Argentina, Egypt, Canada, Switzerland, Japan, India, Finland, New Zealand, Columbia, Guatemala.   The artists book are made in response to the evocative theme of  Invisible Cities and join to enrich the installation. 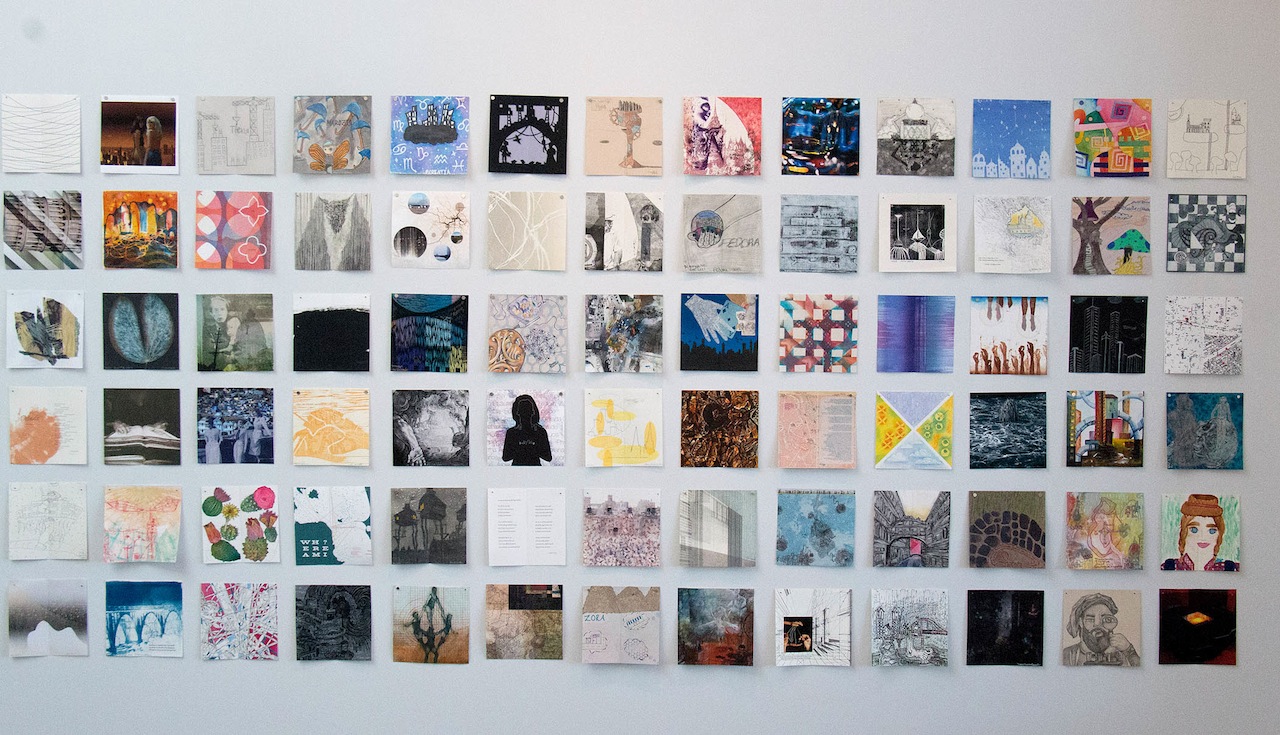 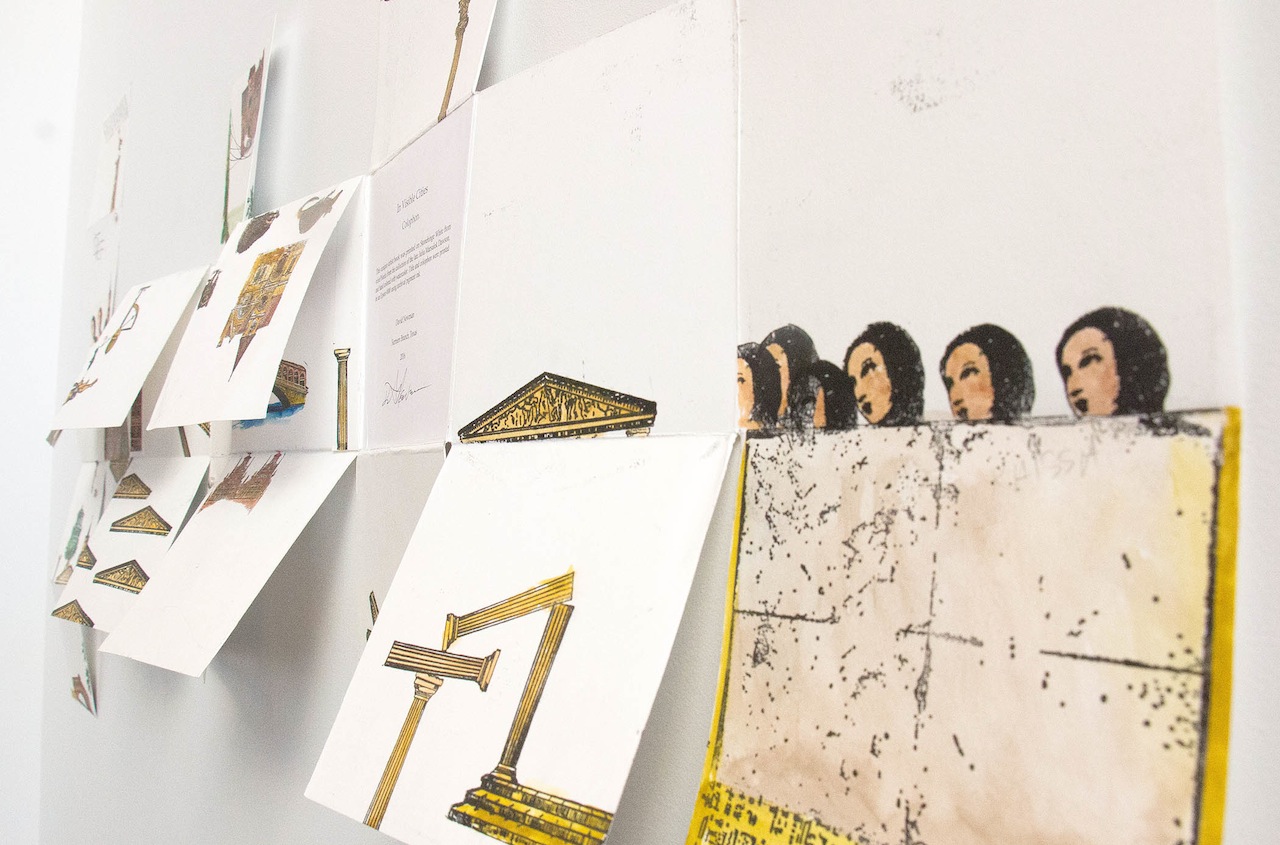 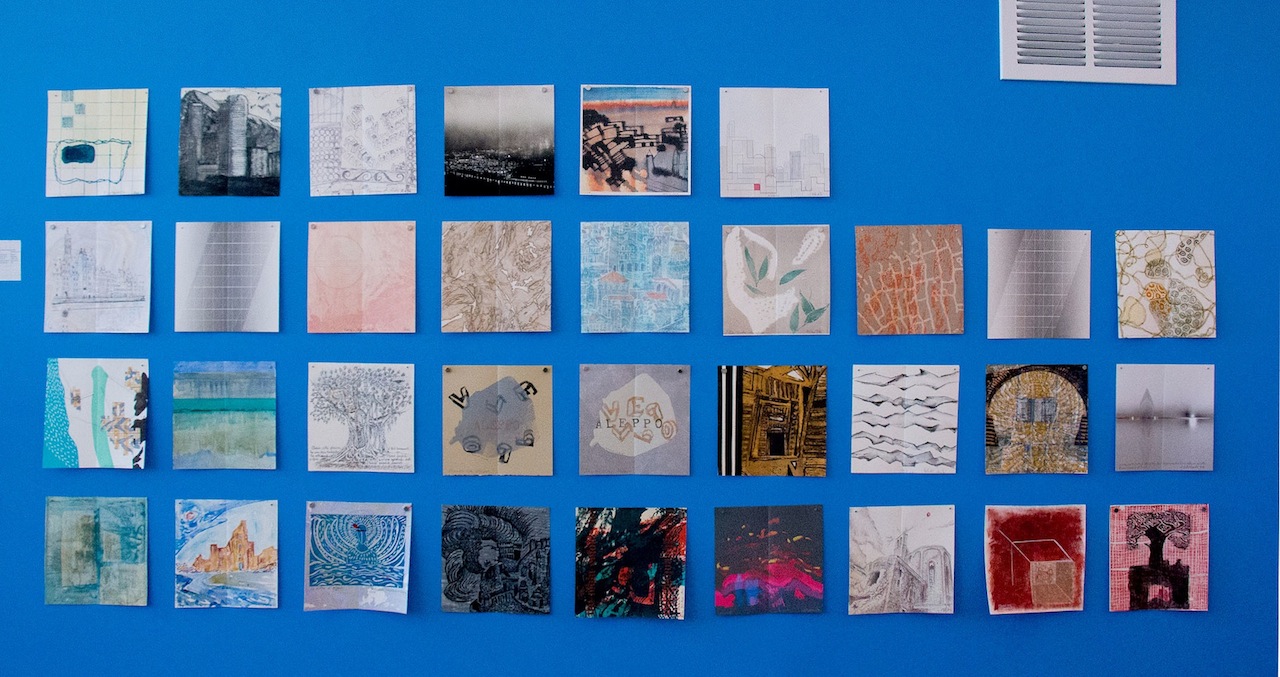 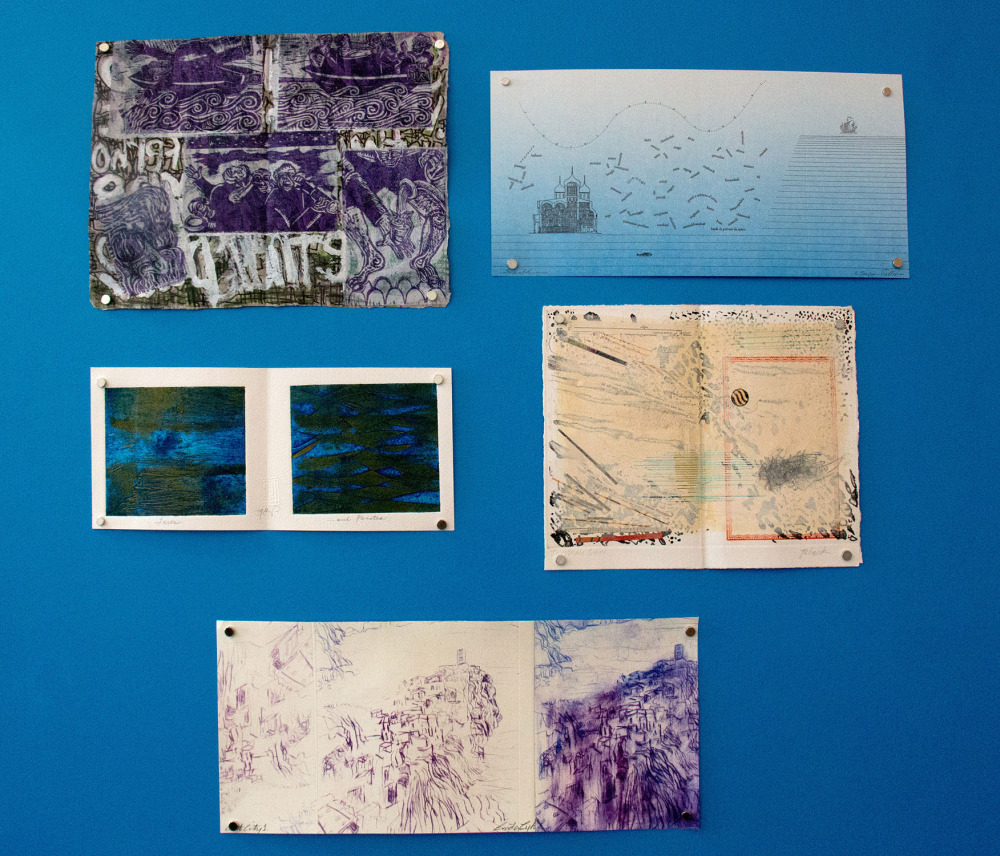 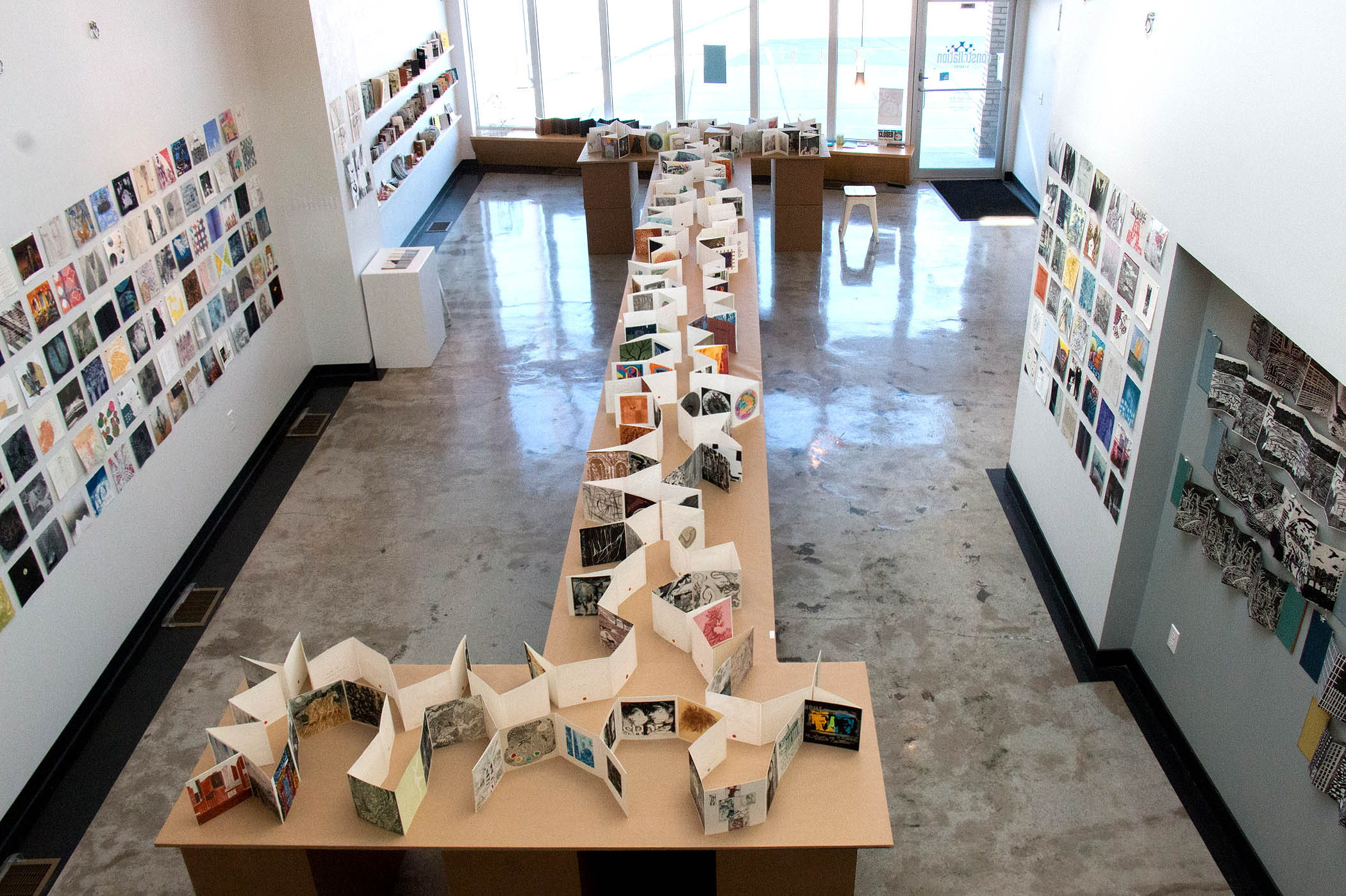 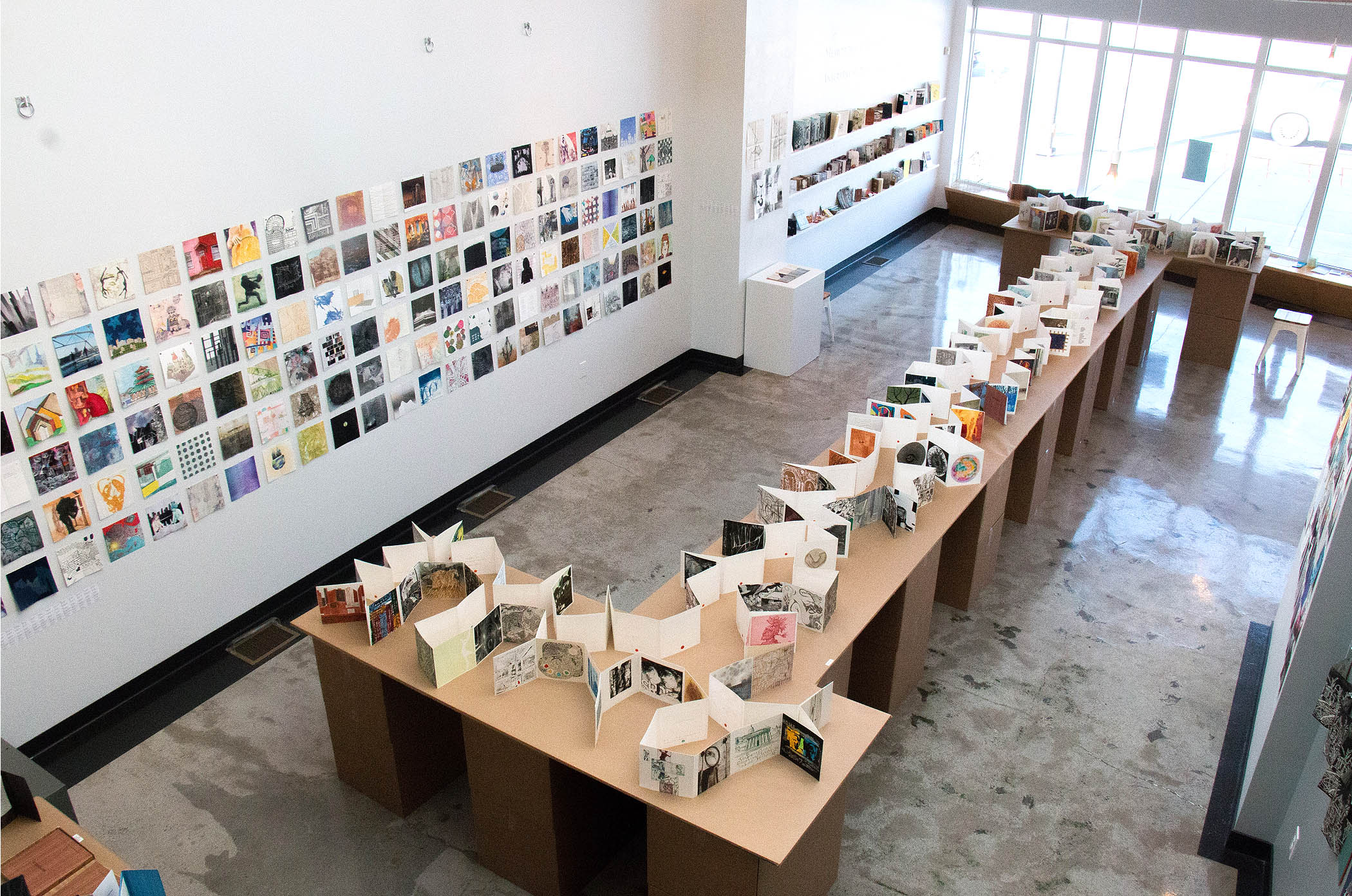 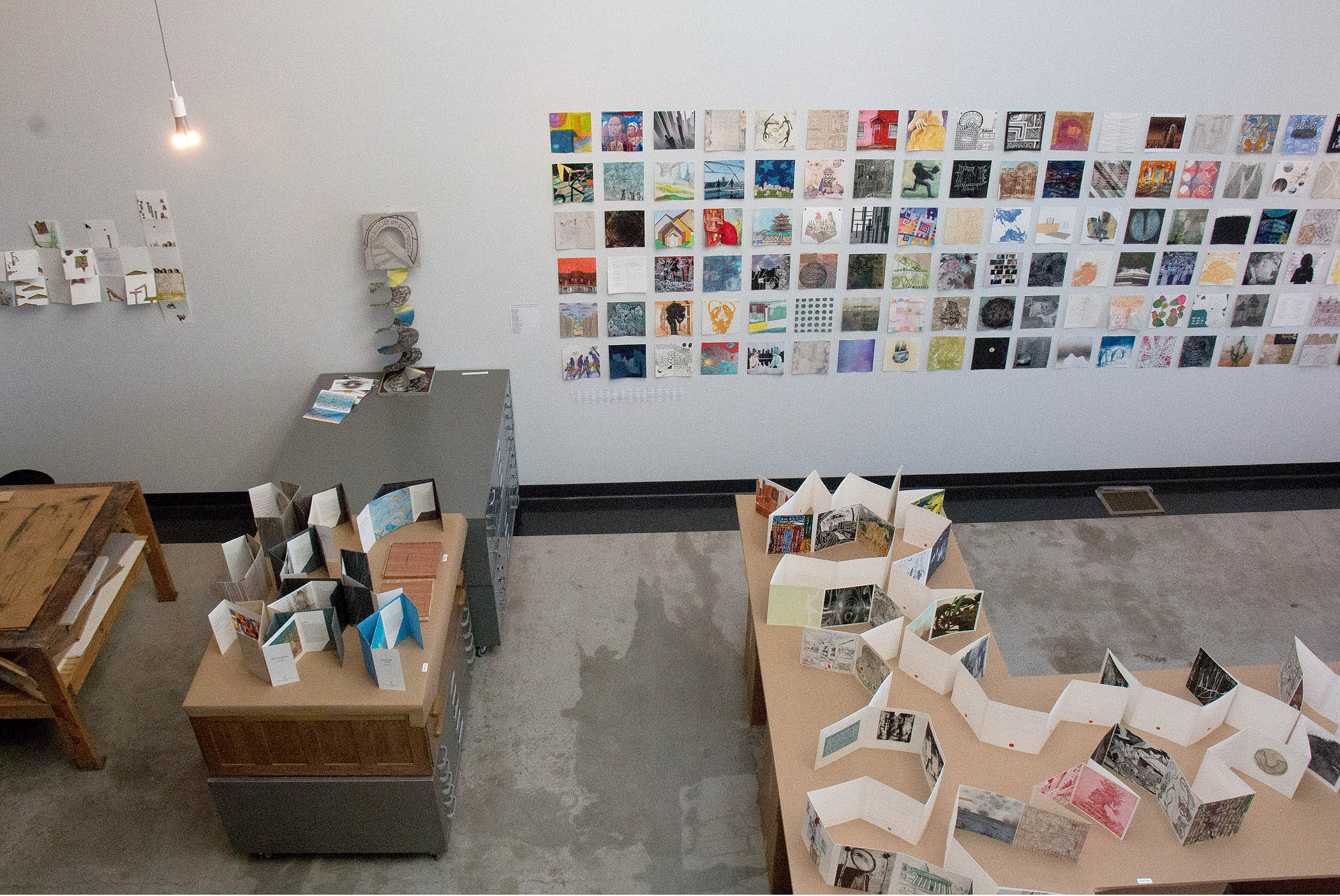 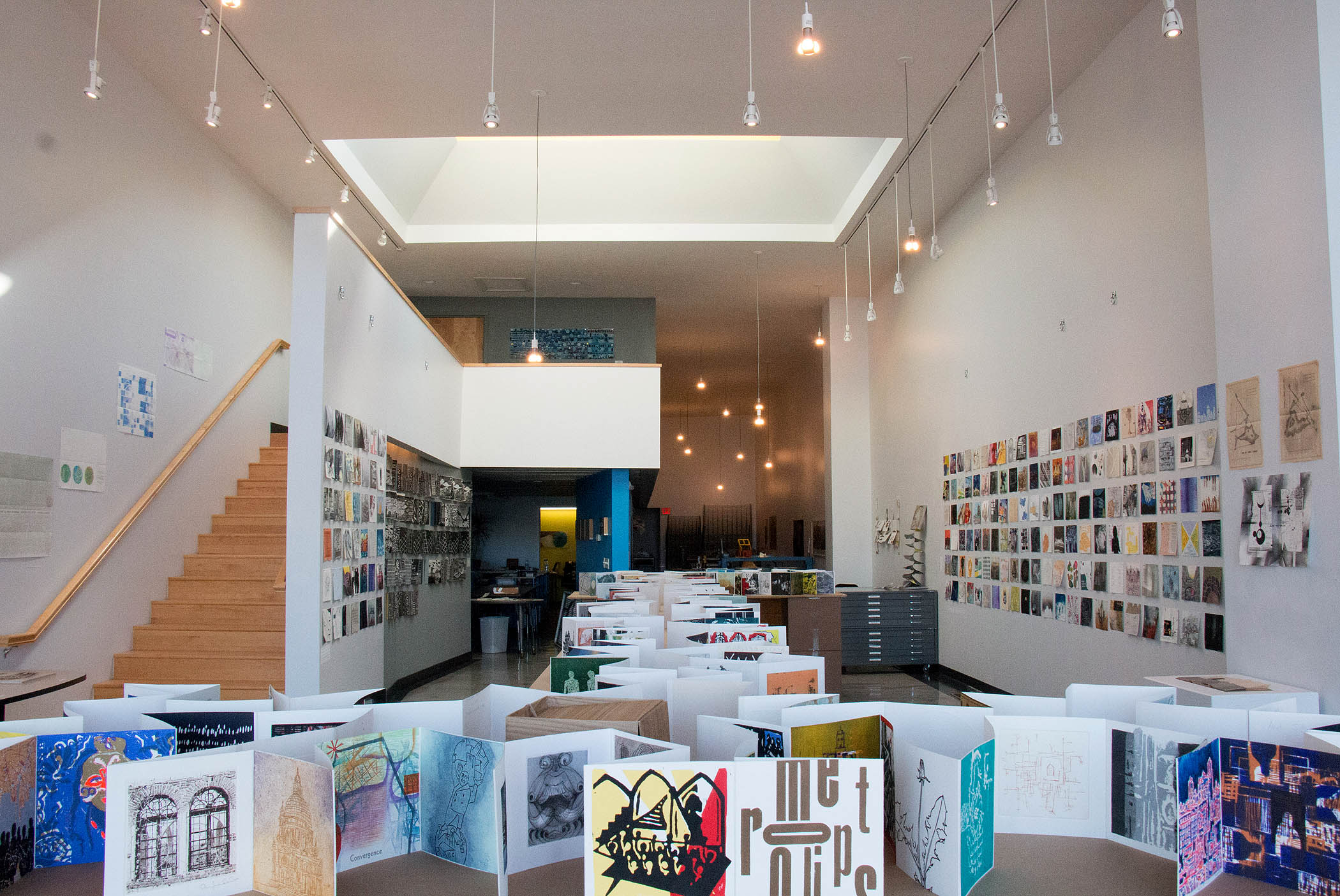 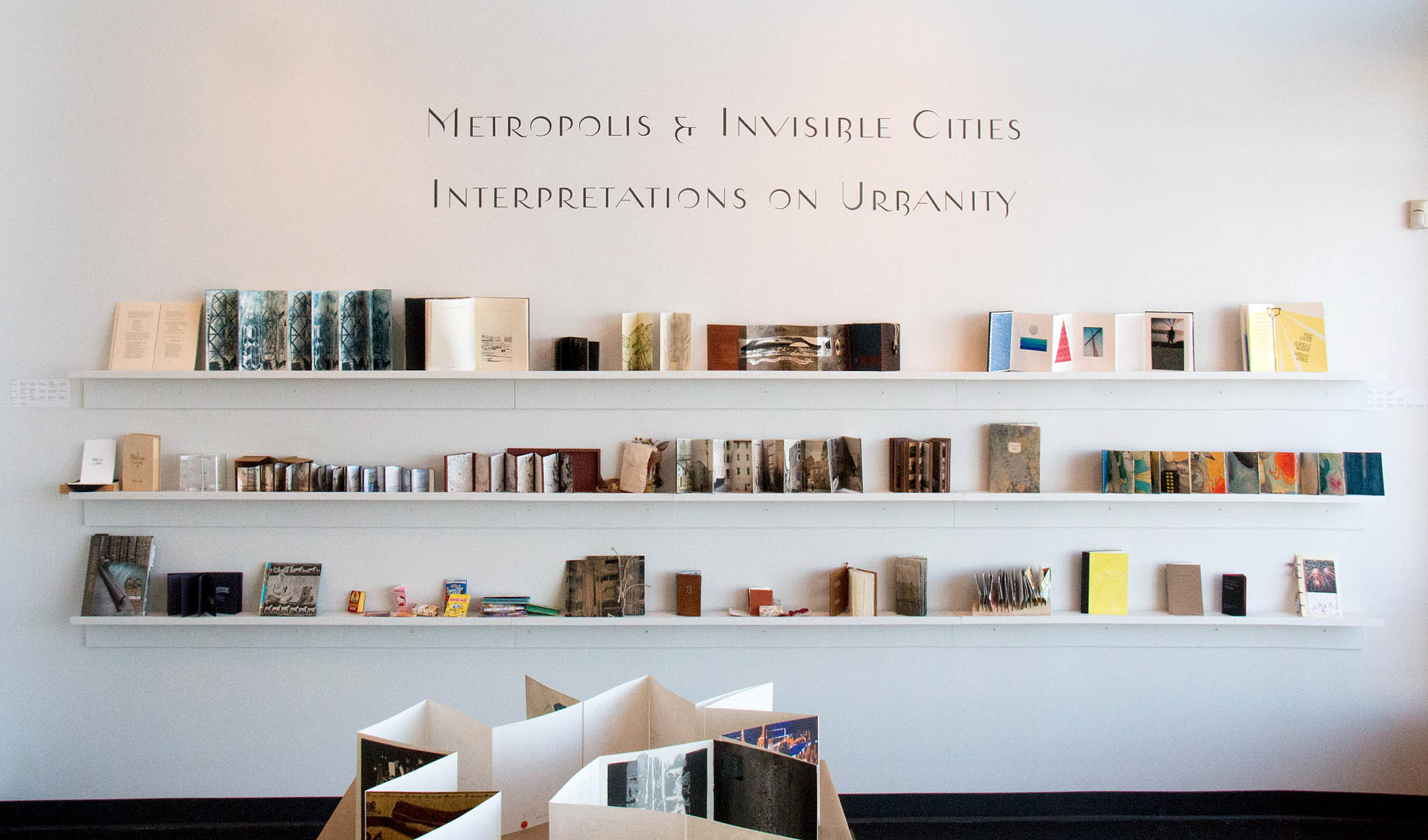 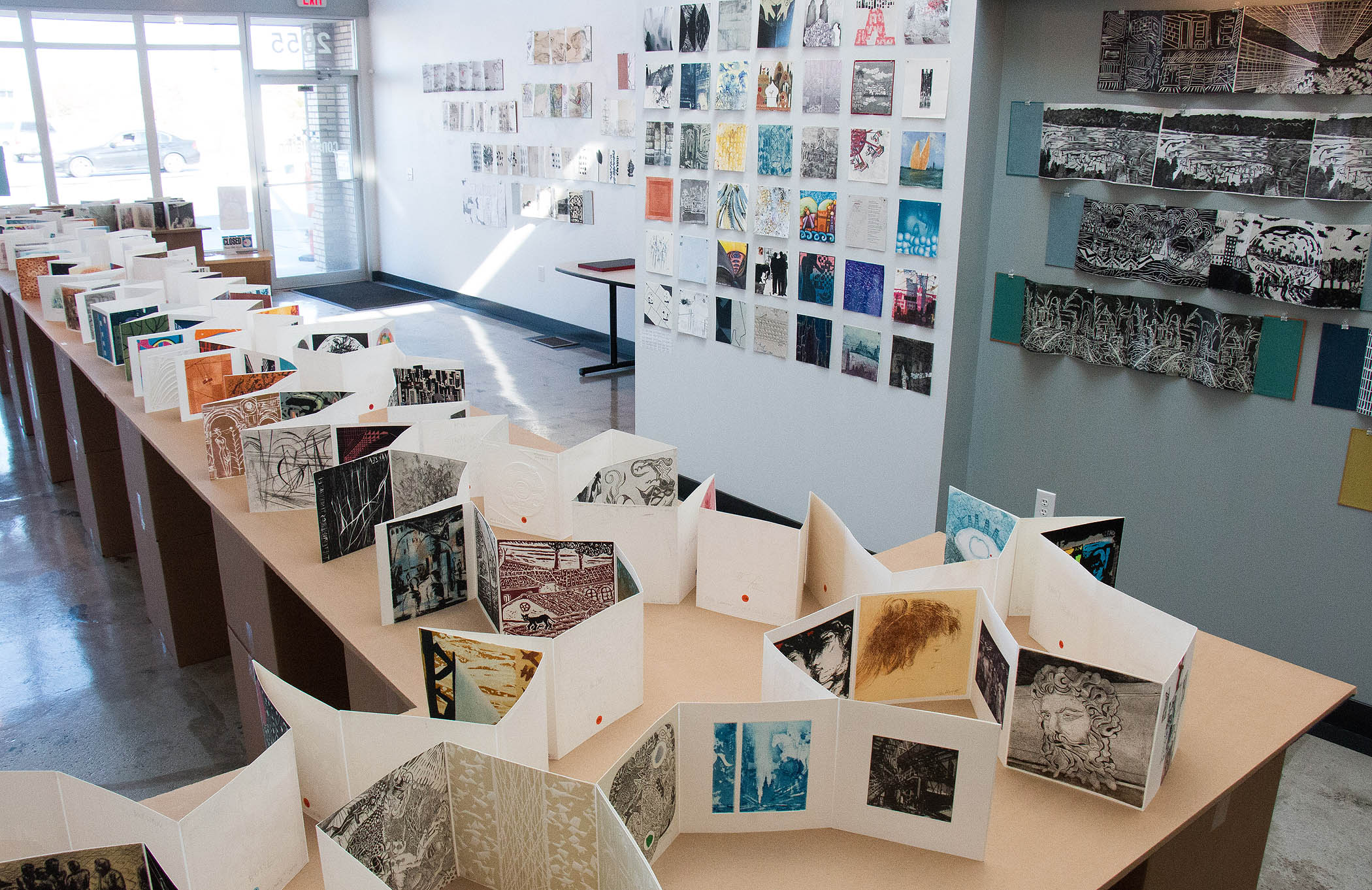 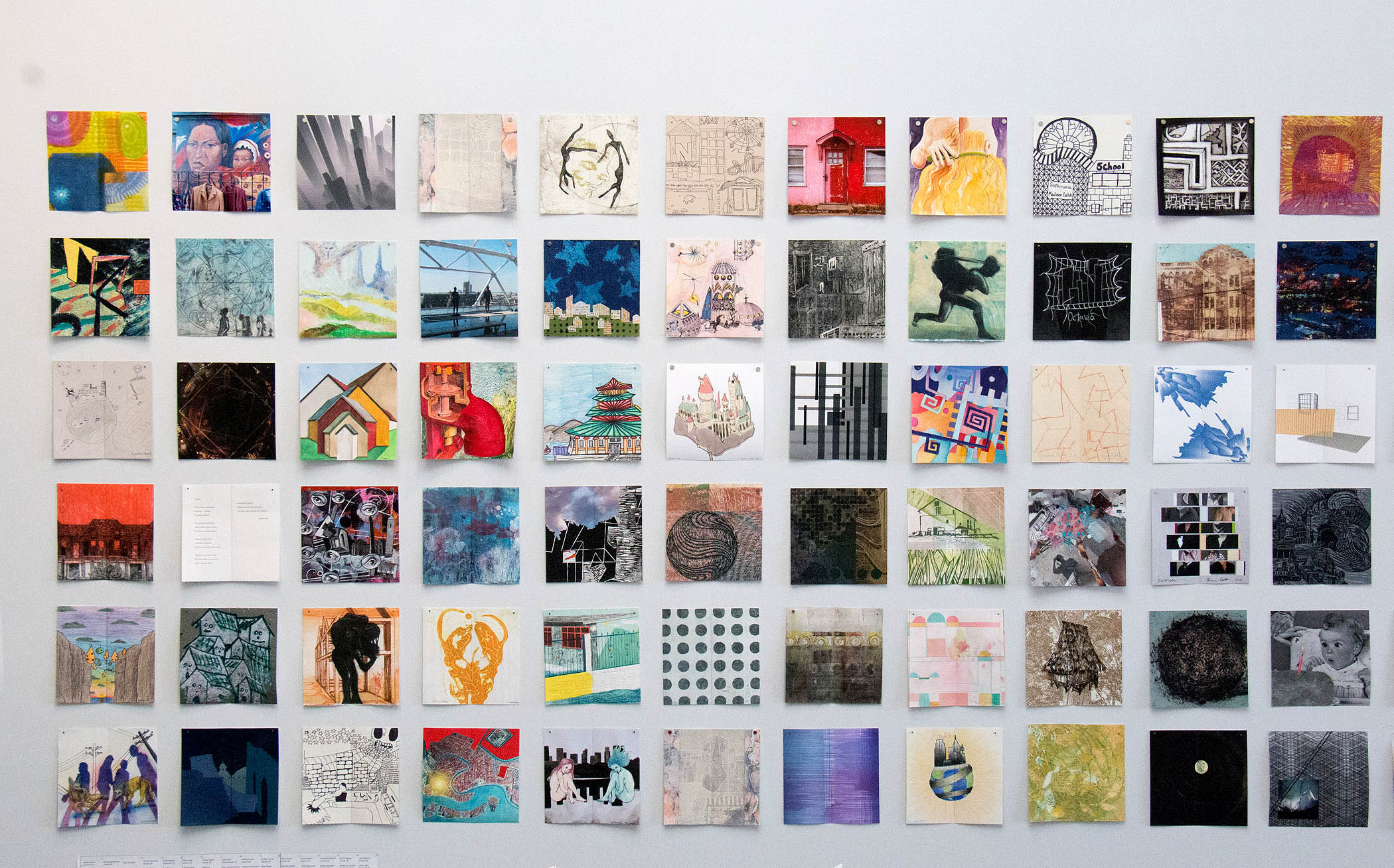 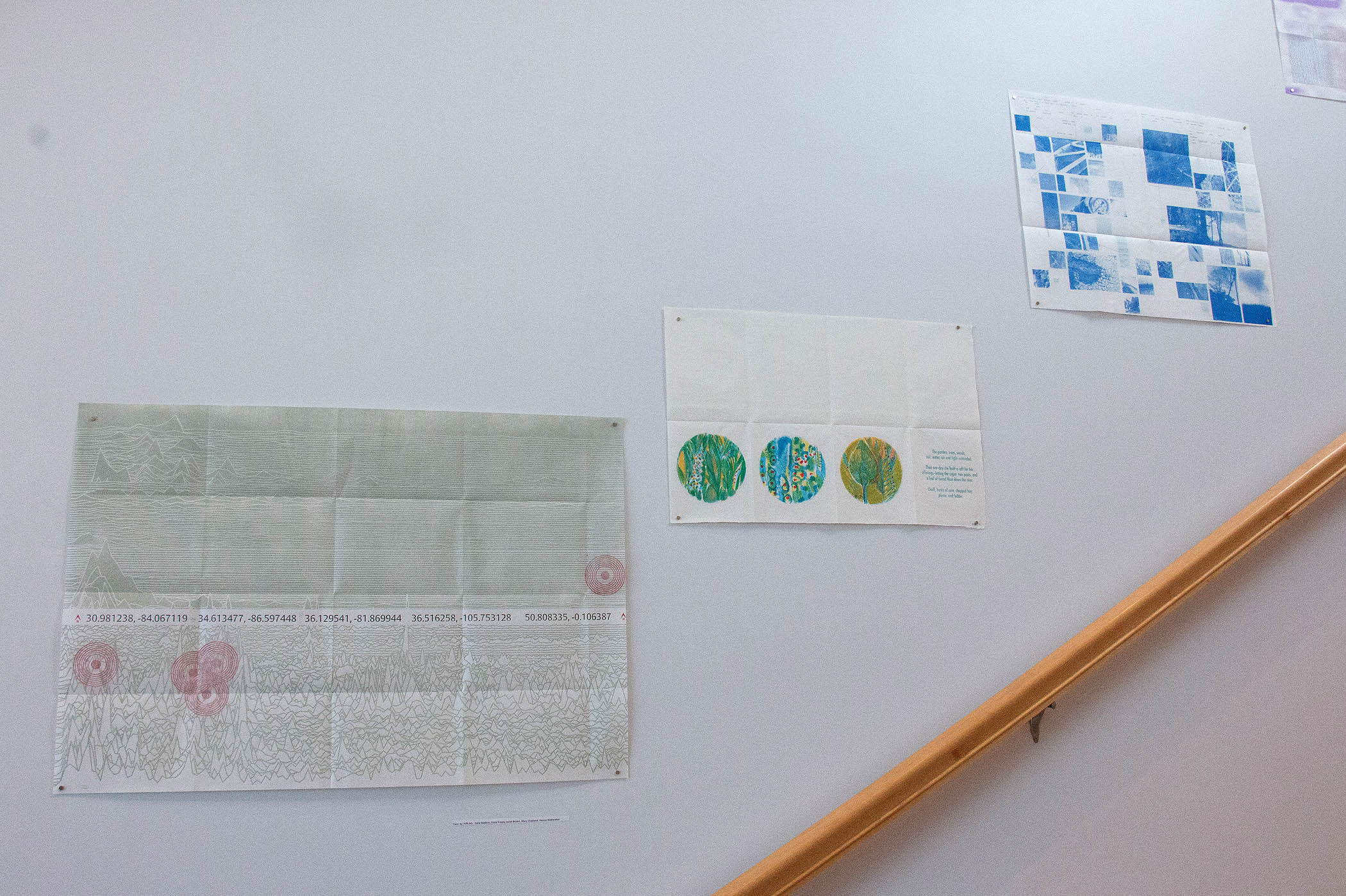 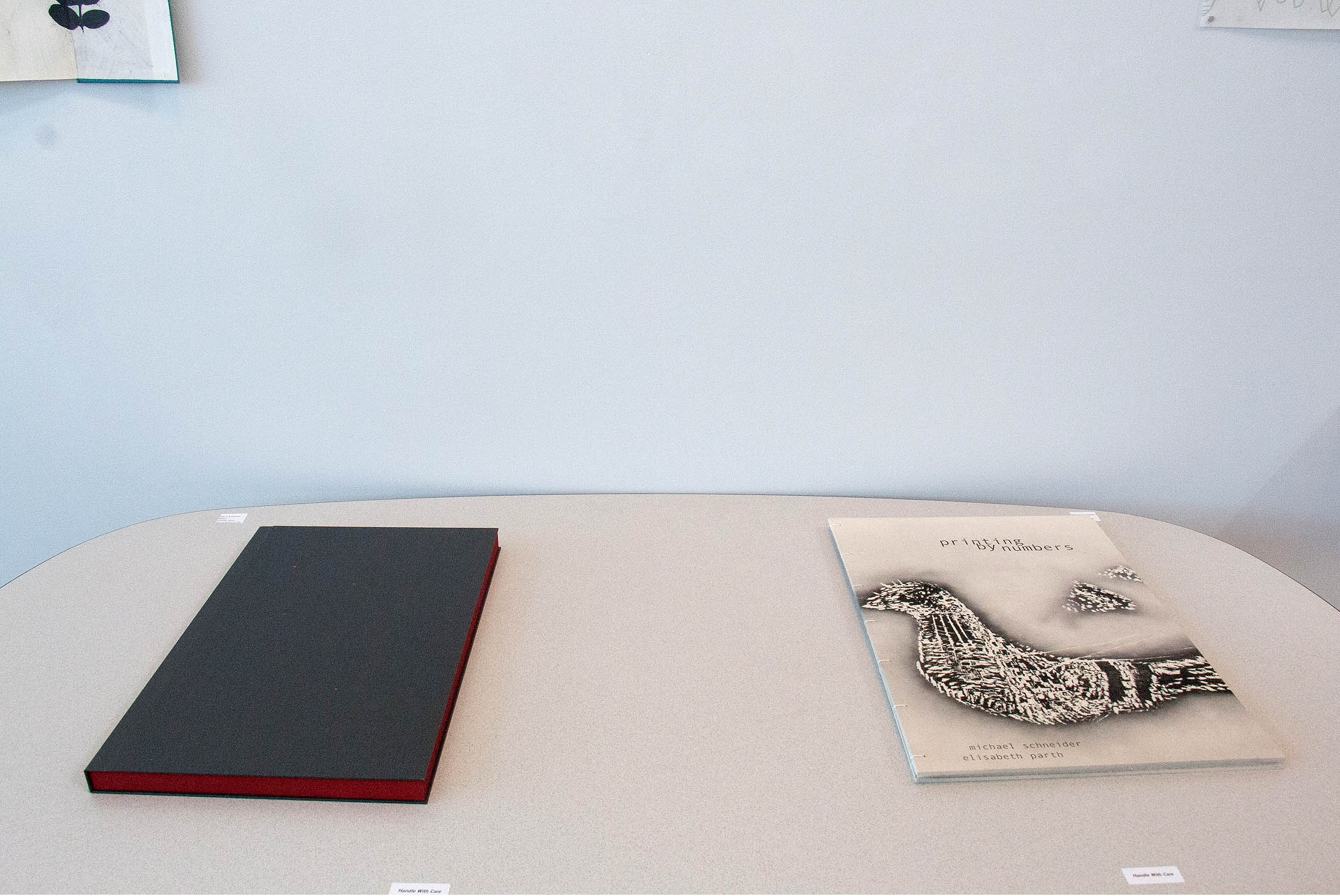 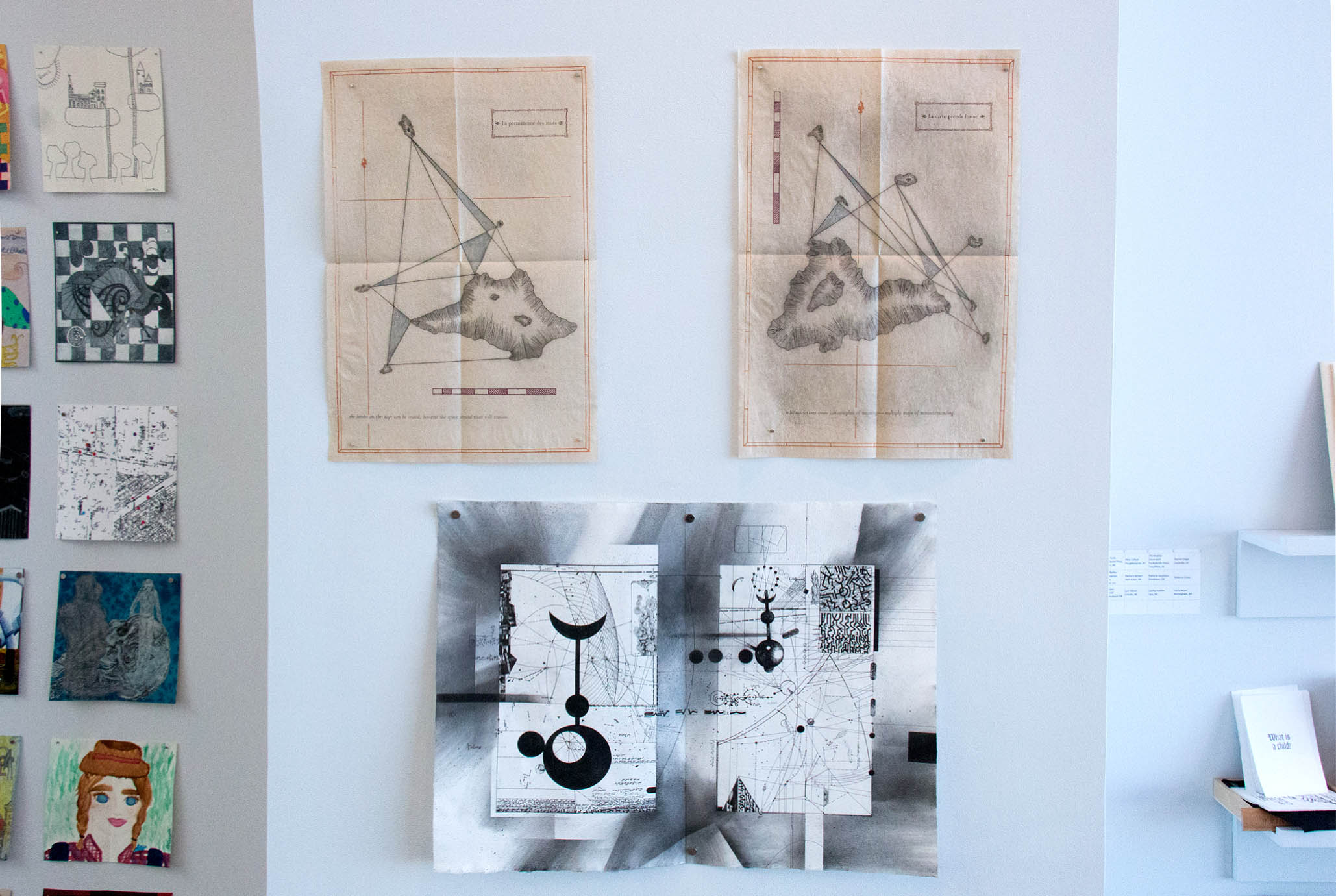 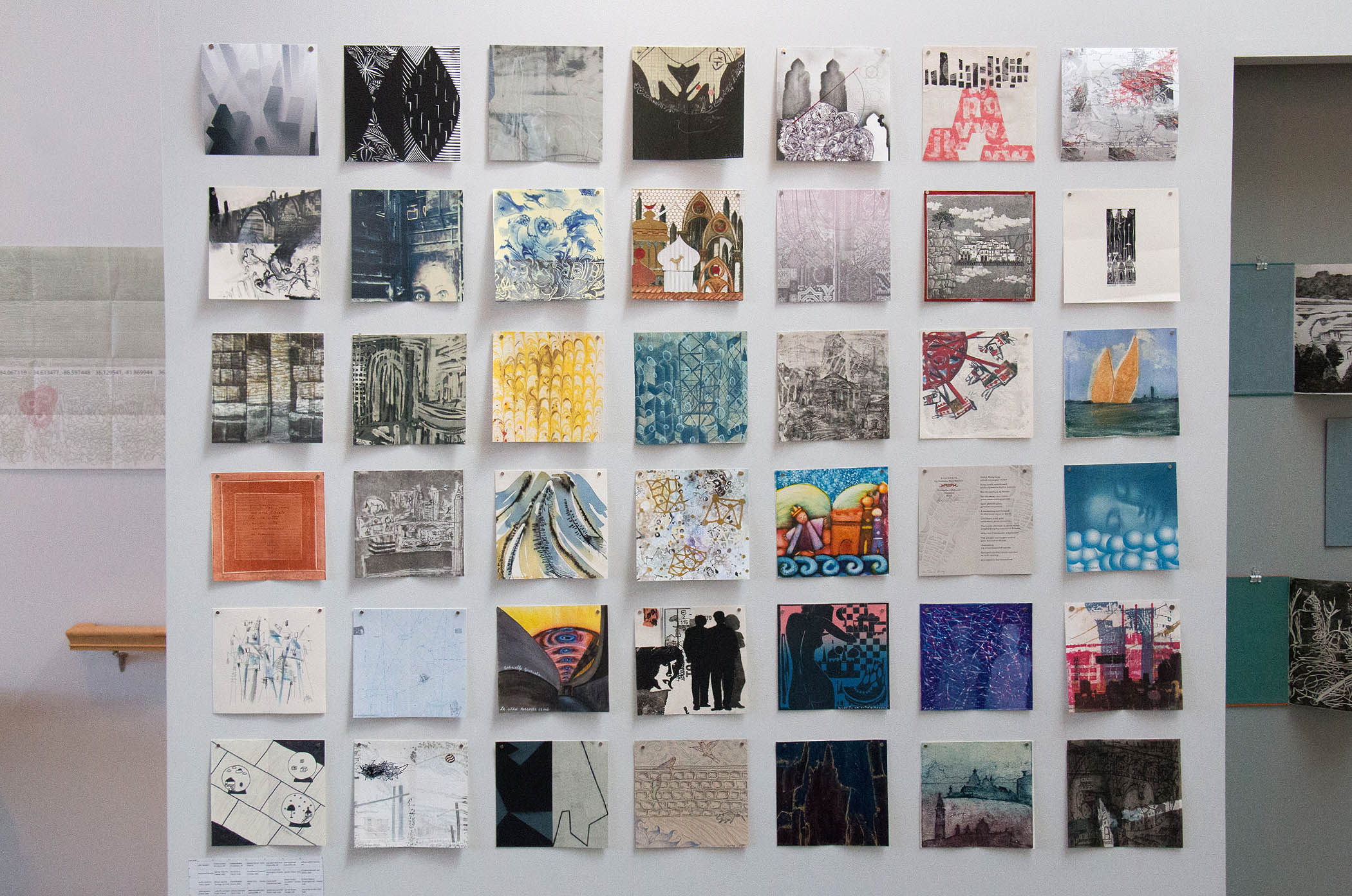 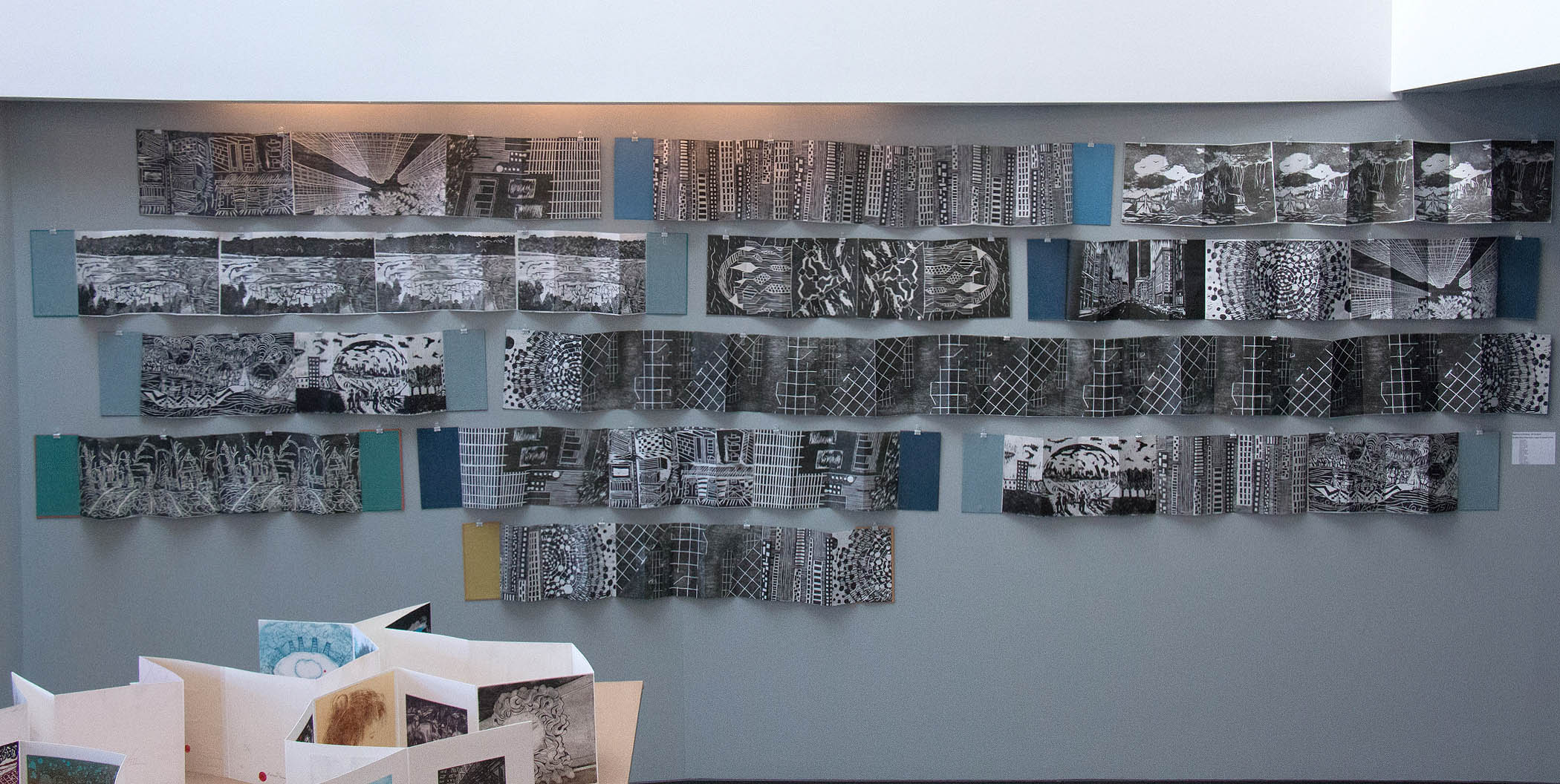 Thanks to Madison for painting a great mural this summer!   This mysterious narrative intrigues us with a fantasy world of larger -than-life figures that seem to stand in the garden plantings.    Madison has a distinctive style and dedication to the her visual story-telling.   You can join this ongoing story with a great photo op in front of this mural!

Metropolis is a handmade book venture in a spectrum of printmaking processes by artists from around the world, including two from Constellation Studios. The theme speaks to the broad contemporary urban experience and extends to the idea of the network of communication possible today.

The idea for this collaboration came from Berlin-based artist Andreas Kramer who prints at Centro Internazionale della Grafica (CIG) in Venice where Metropolis was realized under the guidance of master bookmaking Silvano Gosparini and where the Renaissance legacy of traditional Venetian book publishing continues.

Among the 303 interpretations of this theme, the reader is destined to discover reflections of one’s own meandering thoughts about ‘metropolis’.   The leporello (accordion) construction enhances this stream-of-consciousness effect as it stretches fully to 215 feet.   Ideas circling forwards and backwards through compositional and iconic connections and diversions make an impression underlined by the haptic qualities of the media where ink makes sculptural lines on paper.

What lingers is a metropolis of the mind, a crazy-creative vitality mirroring the variability and vicissitudes of existence, and inspiring a continuing interaction, and a visually challenging mix.

Participants come from: Australia, Japan, Brazil, USA, Italy, Germany, Russia, Poland, Hungary, UK, France, Spain, Tunisia, Canada.   The edition of three has been circulating on exhibition in Italy, Germany, USA and most recently in Sao Paolo, Brazil, and at the Katzen Rotunda Gallery, American University, Washington, DC. This is the premier exhibition in the mid-west.

CONCURRENT is Invisible Cities, an exhibit of artists’ books and folios destined to become a collaborative leporello book that present new interpretations of urbanity. The theme is inspired by the imaginative novel Le citta invisibili by Italian writer Italo Calvino, published in Italy in 1972 in which Marco Polo reports to Emperor Kublia Khan on fantastical, dream-like cities all named after women that he purportedly visited. This book is organized in a mathematical structure. After each eleven descriptions, the two men discuss ideas that evolve from the tales, reflecting on human nature and linguistics.

It remains to be seen what ideas, images and symbology the 150+ US national and international artists will contribute expressing the evolving new experience of real, ideal and virtual contemporaneous and futuristic  city life.

On February 27th, Constellation Studios teams up with writers Katie Schmid Henson and Katie Pryor to host an evening of poetry and visual art. Doors open at 6:00pm, reading begins at 7:00pm, and an art raffle featuring donated work from local and UNL graduate artists will take place at 8:00pm. All proceeds will benefit The Family Literacy Program, supported by the Foundation for Lincoln Public Schools. Karen will also have the letterpress rolling out a few poems from the evening for guests to take home. Featured readers include Belinda Acosta, Katie Pryor, and Kim Tedrow. The event is free to the public and we’d love to see you there! For more information please visit the Facebook event page: https://www.facebook.com/events/878870602226630/

Here are some highlights of the Artists in Residence this fall 2015!

Kathy Puzey, Logan, Utah, was in residence for two weeks in September-October.   She is working on woodcut prints of “pieces of wood” – incredibly detailed and layered, that recreates the growth layers.   She is creating these works for a sculptural installation of print objects.   She enjoyed the concentrated time, and to reconnect with friends in Lincoln, as she is a UNL alumna.

Midori Iizuka, Tokyo, Japan, spent all of October at Constellation Studios.  She drew inspiration from and literally traced the marks of the studio floor.   She captures the random markings as gestures in ink and brush, that will be translated into screen prints onto fabric.  She intends to use the large scale drawing for backdrop to  her performance works.   She also printed woodblocks and created book works, as well as taught a Shibori Tie-Dye workshop.

Macy Chadwick was Artist in Residence in early November for a week, developing prints for upcoming book projects.   The prints were elegantly spare and beautiful, efficient with cut stencils, color layers, and concepts on breath and air.  And those great pinks!

Robert L. Mejer, from Quincy, Illinois, was in residence in November for two weeks and saw the season grow colder.   He set a steady pace for himself of productivity and invention, pulling 3 – 4 monoprints each day.   His distinctive water-base monotype methods enable building of color and compositions, with added on collage plates for a one-time-through the press impression.  He is working on prints during his sabbatical for an upcoming solo show.

Thank you all for being here and contributing to the studio energies and spirit!

Shubho Saha, from Dhaka, Bangladesh, spent a week residency at Constellation Studios, where he printed a color woodcut, made handmade paper, assisted printing with Karen, and visited the UNL campus, museums, and Art Department.   He is a graduate of the Faculty of Fine Arts Dhaka University, and is the studio manager of the community print studio of the Bengal Foundation.   He is continuing on with a two month residency at the Salina Art Center, Kansas…….and now we have this great connection with Salina through Shubho and director Bill North.    It was great to share the studio and conversations about so many things……and reminiscing of our many friends in Dhaka!

Here is the link to a beautiful video of Art at Cedar Point, my summer course taught at UNL Cedar Point Biological Station, near Ogallala, Nebraska.   Created by Kat Shiffler, who has captured the intent of this art and science collaboration.   Watch and enjoy!

Then everyone joined in the Constellation Studio Tour and viewing of “Treasures from the Flatfile”.   The drawers were opened one by one for a dazzling display!  My works ranged from grad school etchings, to the latest “just finished” print, to some collectible antique Japanese books, and the scroll print by Tuula Molinen.  Here are the views:

Wendy and Karen are contributing their art for the LAC Community Supported Art project!

Thanks everyone for a great workshop!   We first made paper from cotton linters and Half-stuff, and t-shirts.   And then we processed kozo fibers, which we cooked, washed and beat by hand and in the beater.    Great experiments and experiences were enjoyed, and good discussions of the process and history.  Here are some action shots!

Printing Mass Migrations was lively, with many hands helping Rachel Simmons create her installation.  Her album is at this link:

We will enjoy the installation through the end of August.  Thanks Rachel for a great residency and engagement with everyone at Constellation Studios!

Preserving and sharing viewpoints from Barbara Tetenbaum’s beautiful installation Instructions for Seeing: My Ántonia.  Follow the layout, the  materiality and typographic play, the visualization that maps connections, all within this immersive presentation.   Here is the link to the review by L. Kent Wolgemott, with other great photos:  http://journalstar.com/entertainment/visual-art/l-kent-wolgamott-innovative-installation-my-antonia-instructions-for-seeing/article_21c01550-5e9d-5d18-89c6-ce7e75103711.html