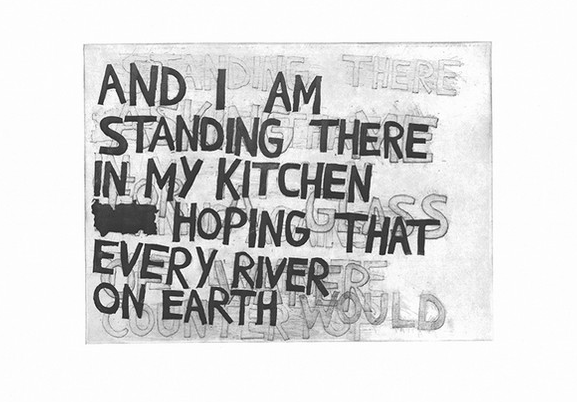 Constellation Studios presents the new prints of Isaiah Jones, who imagines an ordinary domestic dialogue as an extraordinary sequence of etchings with text-as-image.  In these prints, her hand lettered phrases could be spoken or thought by anyone, with the effect of shouts and whispers, as threads of dialogue repeat and spiral into graphic recombinations, as words are redacted, erased, and layered as if echoing memory and visualizing sentences in space.   The narrative allows for relationships to grow, then deteriorate, emphatic declarations become misunderstandings, exploring and voicing inner expressions of desire and anxiety.

Jones created her prints through the etching process, which uses acid to bite into a copper plate.   Areas are preserved with acid resistant grounds while open areas are allowed to etch below the surface, which is where the image is developed.   During printing, the plate holds the ink in the etched textured areas, while the unetched areas are wiped clean.   The plate and paper are run through the press under great pressure to cause the transfer of ink to the paper.    Additionally, Jones further worked the plate by using tools to burnish or scrap the image away, leaving a “history” of what was once there, while new areas were also etched into the plate, for a sense of layering and continual evolution.  The print is the record of her actions, allowing the storytelling to “hang in the air”.  Jones’ print series has a sense of urgency as the quantity of impressions alone demonstrates a “give and take” of flowing ideas and importance of communication.

Isaiah Jones is a Lincoln artist and recent graduate of UNL with an MFA degree. Jones was raised in the mountains of western North Carolina, and earned her BFA in Printmaking from the Savannah College of Art and Design in Atlanta, Georgia, in 2015.  She has exhibited her work locally and served as the master printer to guest artists in Lincoln, Atlanta and Savannah. Jones utilizes traditional printmaking, language, and storytelling to create individual prints and large-scale installations.